This year’s International Women’s Day calls on individuals, communities, workplaces, and education spaces to imagine a world free of bias, stereotypes and discrimination. A world that is diverse, equitable and inclusive, where difference is valued and celebrated. We are encouraged to join the movement to #BreakTheBias through our own thoughts and actions. 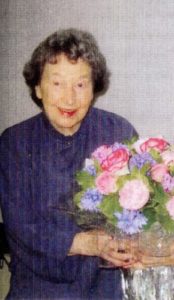 Here at nurtureuk, we want to celebrate the work of an incredible woman who worked tirelessly to #BreakTheBias against children and young people across the UK.

Marjorie Boxall began her work as an Educational Psychologist in the late 1950s, spending most of her career in inner city London. In a time where many children, particularly those from disadvantaged socio-economic backgrounds, were considered ‘maladapted’, Marjorie saw beyond the bias, and instead recognised that they were entering primary school with severe emotional, behavioural, and social difficulties.

Her concern for these children led her to develop the first nurture groups to provide them with the ‘restorative and development experiences’ they were missing.

The success of her pilot project led to further nurture groups being set up across London. At first, the news of the nurture groups’ effectiveness spread by word of mouth, but they gained wider recognition after receiving praise in the influential ‘Warnock Report’ of 1978. During the Inner London Education Authority’s 1980s national campaign to make education more inclusive, over 50 headteachers of schools with nurture groups made submissions arguing that nurture groups were integral to an inclusive approach.

Although Marjorie retired in 1989, she continued to publish books on nurture in education, including Effective Intervention in Primary Schools with Marion Bennathan (1996), and Nurture Groups in Schools with Sylvia Lucas (2002).

Using evidence from her earlier book, The Association of Workers for Children with Emotional and Behavioural Difficulties (AWCEBD) successfully lobbied the Department for Education to support the expansion of nurture groups across the UK. To help train and organise these new groups, the AWCEBD founded the Nurture Group Consortium.

Sadly, Marjorie Boxall passed away in 2004, a year before the Consortium became an independent charity now known as nurtureuk.

Her legacy lives on, as the charity established an accreditation system for nurture groups, which it named – in tribute to Marjorie’s unique contribution to the nurture movement – the Marjorie Boxall Quality Mark Award. Over 75 nurture groups have been given this prestigious award over the past five years.

Nurtureuk’s unique online tool, the Boxall Profile®, was also named in recognition of Marjorie’s work. The tool assesses the social, emotional and mental development of pupils aged 4-18, providing education professionals with a precise picture of pupils’ strengths, as well as any difficulties that may be causing a barrier to their learning.

There are now over 11,000 schools across the UK using the Boxall Profile® to assess their pupils’ social, emotional and mental health – that’s over a third of all UK schools using the tool to #breakthebias of struggling children and young people, helping them instead to flourish and learn.